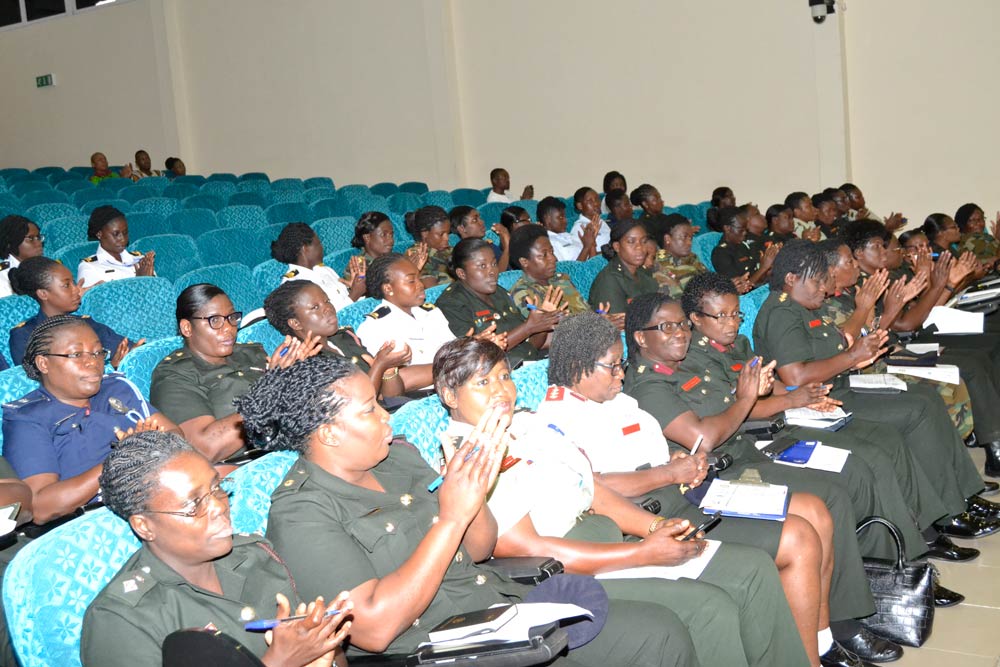 Accra, March 8th, 2018:   International Women’s Day is a celebration of the economic, political, social and cultural achievements of women across the globe and a call-to-action to progression towards gender parity all over the world. The theme for the celebration this year is #PressforProgress.

The Women Peace and Security Institute wants to use this day to press for progress in the elimination of gender based violence across the African continent especially in areas where conflict continues to rage. Violent conflict continues to have devastating consequences, resulting in a widening gap between women and men. Women often have fewer resources to protect themselves, their children and families.

Though women have led peace movements and driven community recoveries post-conflict, they are almost completely missing from peace negotiations. In the deployment of personnel to mitigate in the conflict, female personnel are still in the minority. Exclusion from reconstruction limits access to opportunities to recover, to gain justice for human rights abuses, and to participate in shaping reformed laws and public institutions.

As conflicts and crises in Africa took a more complex turn in recent years, there has been a devastating upsurge of violence against women and girls. In Northern Nigeria young girls have been used as bargaining chips for the release of suspected militants. In Democratic Republic of the Congo (DRC), South Sudan and Sudan women and young girls are used as weapons of war by some national armies and rebel or militant groups.

It must be acknowledged that significant progress has been made across the continent to increase women in leadership positions as well as at the table. In countries like Ghana, Nigeria, Senegal, and Rwanda some concerted efforts have been to reduce the marginalization of women especially in the areas of education, economic and political participation, access to healthcare and personal safety.

Despite these achievements, the protection of women and girls against gender-based violence continues to be high on the continent. This significant absence of women in the security agencies has been attributed to capacity gaps; lack of resources; lack of morale; family support and stigma. The greatest of all these challenges continues to be stigma– societal norms, perception and stereotypes. Cultural norms prevent and limit expectations of what women can do or should do in society. It contributes to the continuous sexual objectification of women and limits female achievement to only social norms (e.g., marriage and child birth).  These challenges inhibit women’s advancement and gender equality on our continent.

In 2018 as we #PressforProgress, we advocate for a continental consciousness that limits the cultural and societal norms which impede on the success and advancement of women. We will continue to work with security forces to increase the number of females recruited into the security agencies and deployed in peace missions. We will continue to partner with allies (men and organizations) who over the years have supported the call for equality among the sexes. These allies continue to fight to ensure that the ‘right woman or man’ is given the job.

We therefore continue to call on more men, specifically, men in male dominated fields to #PressforProgress and become advocates of the quest for gender equality. Let us work together to ensure that the next generation respects and understands the importance of gender parity. As we #PressforProgress, let us increase the participation of women in all sphere of national, regional and continental development.

Let’s all collectively press the agenda and make a positive difference for women in our societies.  Men and Women, let’s make the day a success.