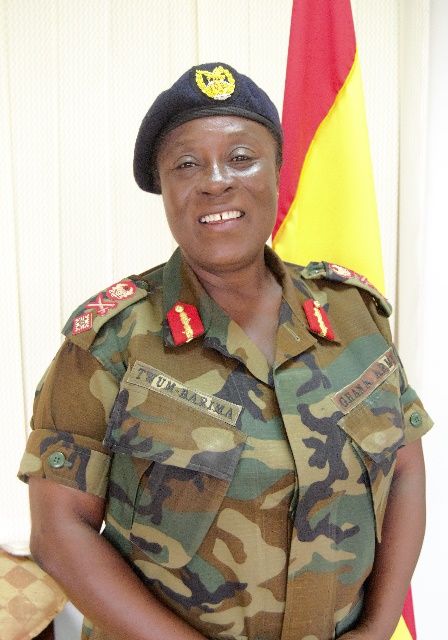 August 2019, month of Celebrations for the females of the Ghana Armed Forces

Joining the Force at a time when not many units and functions were open to women, Felicia believes perseverance and hard work of the women of the Armed Forces have resulted in many doors being opened now to females. Ironically, this perseverance and hardwork was on display this month of August as the Force celebrated 60 years of recruiting females into the Armed Forces. All these efforts go to affirm the commitment of the Government of Ghana and the Ghana Armed Forces’ at promoting equal opportunities for both males and females in the Service.

Brigadier General Twum-Barima was born on 12th January 1963 in Kibi in the Eastern Region of Ghana. She is an old student of Aburi Girls Secondary School and completed a Bachelor Degree in English at the University of Ghana in 1986. She is married with children.

In her 29 years with the Force she has occupied 22 positions both in Ghana and abroad and served in six United Nations Peacekeeping Missions. She served as a Staff Officer in the UN mission in Liberia (2010-2011) and Ethiopia and Eritrea (2006-2007). She served as a Military Observer (MILOB) in the UN Mission in the Democratic Republic of Congo, where she was among the first females to be deployed as a MILOB in that theater. Brig. Gen. Twum-Barima also served in the UN Interim Force in Lebanon (2002-2003) and Rwanda (1994-1995).

With her new rank comes a new position. She bows out as Director of Education, General Headquarters to assume the office of Defense Attaché at the Ghana Embassy in Abidjan, Cote D’Ivoire. A position she plans to approach with determination and optimism.